It’s been obvious for some time that the eurozone economy is weak. How much is the basic structural weakness of the system itself and how much a cyclical turn is more a political question than an economic one for us investors.

That the economy seems to be sliding toward a recession is what concerns us, and we’ve now more information showing this is likely. We’d certainly say that Germany is in contraction territory at present. Whether this becomes a recession or not depends on whether it lasts the requisite 6 months to qualify.

As to getting out of the recession, the ECB has already lowered interest rates further into negative territory. There’s not a great deal more short of helicopter money that they can do – and helicopter money’s not going to fly for political reasons again.

The other policy lever is German fiscal policy, and while that might change, it will take many months to enact and then more to have effect.

The basic takeaway here is that we probably are looking at an at least German recession. The biggest effect of which might well be booms in the peripheral economies, as with the last time this happened in the 00s. The trick is to look to that periphery this time around as well.

We’ve the flash numbers for the German PMI here, and they really don’t look good:

As we can see, the manufacturing number is sufficiently contractionary that it’s dragging the entire economy into lower output levels. We should recall here that the manufacturing sector in Germany is about twice the size, as a portion of the economy, than it is in near all other rich countries. It therefore has a greater influence.

As we’ve said before, this looks like a recession in Germany.

It now looks like the German economy is heading into recession. This is only partly to do with domestic economic conditions, it’s more about net exports. Germany has gained tremendously as the supplier of the sort of machinery China needs to industrialise. As that growth has slowed, and also as it swings more to services than manufacturing, Germany’s long boom from that issue is fading.

We now get a prediction that Germany is indeed going to be in recession.

We’ve also got the French numbers:

Flash France Composite Output Index at 51.3 in September from 52.9 in August (4-month low)

These are all weak, but apart from the manufacturing output – more or less stable given our margins of error – still expansionary. France isn’t in recession that is.

We’ve the Eurozone numbers as well:

We have that in chart form as well: 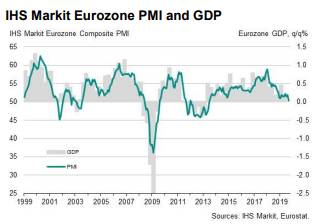 We should note that the German numbers are a substantial portion of the eurozone ones. Not only is Germany by far the largest economy, its manufacturing sector is very much larger within itself as well. So, German manufacturing has an outsized influence upon the eurozone numbers.

The Question Now Is What Does Anyone Do About This?

The obvious thing to do is lower interest rates again. Which the European Central Bank just did, of course:

The European Central Bank went all out during its September meeting. Not only did it cut its deposit rate to -0.5% from -0.4%, but it also announced a new round of open-ended quantitative easing, to the tune of €20 billion of purchases per month. Adding to that, it extended the maturity of its TLTRO III programme while also easing its modalities, linked its forward guidance on rates to the 2% inflation target, which sounds like wishful thinking, as well as introduced a two-tier system for excess reserve remuneration. The euro plunged following the bank’s decision, as the package was more than markets could have hoped for.

Obviously, monetary policy doesn’t work after only a few days. So, the jury’s out on whether this will be enough.

It’s also generally thought that the ECB doesn’t have a great deal more than it can do. Negative rates will work, yes, but there does come a time when the storage costs of physical banknotes are lower than the negative interest rate. If people do that in any volume, then that shrinks the money supply, exactly the opposite of what is being sought.

The standard answer would be that Germany should expand fiscal policy. Cut taxes and raise spending that is. The slight unfortunateness here being that standard Keynesian theory never really took hold in Germany. It’s just not the normal political reaction to economic troubles.

Germany’s in recession, most of the rest of the eurozone isn’t. That’s the crucial point to grasp here. But monetary policy has already been set for that German problem – as it should be, it’s by far the largest single part of the eurozone economy. I think this is a basic problem with the very idea of the eurozone, and the theory of optimal currency areas backs me up more than a bit.

The economic problem being that the only way out of this is German fiscal policy.

That, in itself, brings another problem.

It’s worth looking back and seeing what happened the last time that Germany was out of step with the general eurozone business cycle. This is in the early 00s, before the Hartz IV reforms of the labour market. As should have been done, interest rates were set for Germany, the larger part of the wider eurozone economy. This meant that they were significantly too low for the peripheral economies. That in turn set off the mother of all property booms in Spain and Ireland.

Low interest rates set for Germany will have that effect in economies that aren’t in recession. Cheap money does boost asset prices. In fact, we’re seeing a property boom at least starting in Portugal, where I currently am. One estimate – admittedly, a partial report in a rather biased local paper – has prices of top end housing rising 10% just in the first quarter 2019.

A reasonable expectation is that eurozone monetary policy will be as expansionary as possible for a couple of years yet. This could (perhaps should) lead to property booms in the peripheral economies still growing. For the brave, that would be where to look for opportunities.

Disclosure: I/we have no positions in any stocks mentioned, and no plans to initiate any positions within the next 72 hours. I wrote this article myself, and it expresses my own opinions. I am not receiving compensation for it (other than from Seeking Alpha). I have no business relationship with any company whose stock is mentioned in this article.

Students strike as protesting kids walk out of school to rally...